India is the 7th largest country by area in the world. The country of India is further split into 29 states & 8 union territories. The land of India is home to some of the most diverse topographical features – mountain ranges like the Himalayas & the Vindhyas; Coastal Plains on both sides of the Indian peninsula – between the Eastern Ghats & the Bay of Bengal on the east coast along with the coastal plains that lie between the Western Ghats & the Arabian Sea on the west coast; World’s 2nd largest peninsular region – contains mountain ranges & plateaus; The Deccan Plateau is the largest plateau in India, it extends towards the southern part of India from the Satpura range & is bordered by the Western Ghats on the west & the Eastern Ghats on the east, the altitude of the plateau varies from 300m to 1800m; India has 2 major groups of islands – the Lakshwadeep that lie in the Arabian Sea & the Andaman & Nicobar Islands that lie in the Bay of Bengal.

The diversity of topographical features of the land of India along with the numerous freshwater bodies of the country makes it the most cultivated land in the world. India has the largest cultivated land area compared to any country with 46, 74, 63, 602 acres or a whopping 57% of its total area. At 52.8% of its total area, India has a staggering 43, 33, 46, 556 acres of arable land. Around 51% of this land is under cultivation and used for agricultural practices, 22% lies under forest cover; 3-4% of the land is used for pasture for animal grazing. Built-up areas (cities, towns & villages) & uncultivated land constitute about 12% of India’s landmass. A meagre 5% of India’s land mass is uncultivated land with potential to be converted into land for agricultural use. 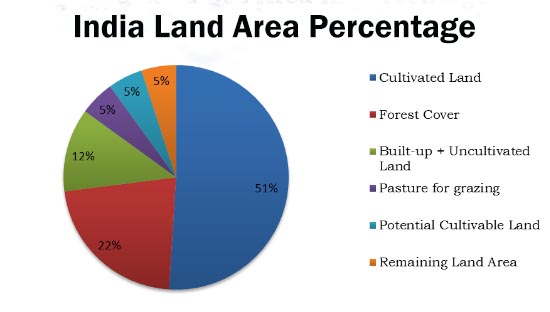 Telangana – 27.6+ million acres (1, 12, 077 sq. km). One of the newer states of India, Telangana was formed in the year 2014 after the bifurcation of Andhra Pradesh. Telangana is growing to become the largest producer of rice in the country. Telangana is the 11th largest state in India & covers 3.7% of the total area of India.

Telangana is the 11th largest state by land area in India. Telangana contains 2, 76, 95, 571 acres of land between its borders. Telangana has a semi-arid climate; it is usually hot and dry with spells of rain during the monsoon from the end of June to September/October.

Land Area Use for Telangana State 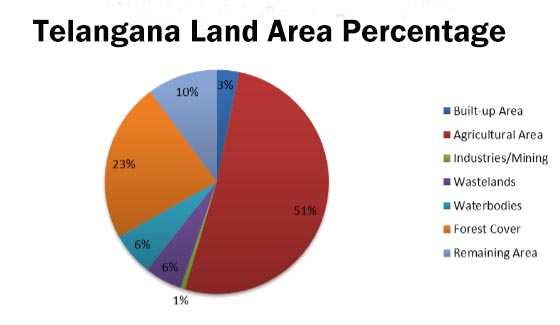 Hyderabad is the capital city of the state of Telangana. The city of Hyderabad lies on the Deccan Plateau and enjoys a central position in the Southern part of India’s mainland. The district of Hyderabad encloses an area of 53, 622 acres (217 sq. km). Hyderabad has emerged as an industrial hub with the onset of the 21st century which have led to rapid growth & development of the city. The boundaries of the city of Hyderabad change on a day to day basis as it expands to accommodate the ever growing population.

The Hyderabad Metropolitan Development Authority (HMDA) has been tasked with planning the expansion of Hyderabad. The area that is covered by the HMDA comprises of the whole area of Hyderabad district along with some areas of neighbouring districts of Rangareddy, Sangareddy&Medchal-Malkajgiri. The total area under the HMDA is 17, 93, 244 acres with a population of 95 lakh occupying the area. HMDA is continuously drafting plans for up to 20 years in the futureand auctioning plots for future development in areas around the outskirts of Hyderabad like Miyapur, Shankarpally, Bachupally, Tellapur among others.

The population density of HMDA region is 10, 477 per sq. km. If calculated per person, the average person’s share would amount to 5.29 acres of land if divided equally. A lot of this land is already occupied. HMDA is increasing its efforts to ensure land development keeps up with the demand. As the population in the city increases, less land will be available to invest in. Therefore right now is the best time to invest in some real estate in terms of plots, agricultural land – and you can do it easily through KFortune Real World; Check out our current projects here.

4. Canada – The largest territorial country in the North American continent ranks 4th in the list of countries with largest land area as it has more water territory than USA & China. Canada is spread across an area of 2.24+ billion acres (9,093,507 sq. km).

5. Gujarat – 48.4+ million acres (1, 96, 024 sq. km). Gujarat is the western most state of India. It is the birth state of Mahatma Gandhi & current Indian Prime Minister Narendra Modi. The state of Gujarat is one of the main producers of tobacco, cotton & groundnuts in India.

8. Odisha – 38.4+ million acres (1, 55, 707 sq. km). Odisha lies to the north of Telangana & Andhra Pradesh. Odisha has the Bay of Bengal to its east and is home to some of the important ports on the eastern coast of India. The northern part of Odisha is rich in minerals & metal ores. Odisha cover about 5% of India’s total land area.

10. Tamil Nadu – 32.1+ million acres (1, 30, 058 sq. km). The southernmost state of India, Tamil Nadu has a tropical and hot climate throughout the year. Its capital Chennai is arguably the most important port on the eastern coast of India. Tamil Nadu excels in manufacturing industries. It constitutes for 4.3% of Indian land.